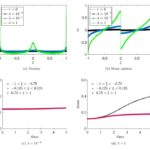 In this paper, we discuss the passage to hydrodynamic equations for kinetic models of opinion formation. The considered kinetic models feature an opinion density depending on an additional microscopic variable, identified with the personal preference. This variable describes an opinion-driven polarisation process, leading finally to a choice among some possible options, as it happens e.g. in referendums or elections. Like in the kinetic theory of rarefied gases, the derivation of hydrodynamic equations is essentially based on the computation of the local equilibrium distribution of the opinions from the underlying kinetic model. Several numerical examples validate the resulting model, shedding light on the crucial role played by the distinction between opinion and preference formation on the choice processes in multi-agent societies.