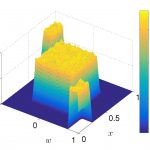 In this paper we consider the modeling of opinion dynamics over time dependent large scale networks. A kinetic description of the agents’ distribution over the evolving network is considered which combines an opinion update based on binary interactions between agents with a dynamic creation and removal process of new connections. The number of connections of each agent influences the spreading of opinions in the network but also the way connections are created is influenced by the agents’ opinion. The evolution of the network of connections is studied by showing that its asymptotic behavior is consistent both with Poisson distributions and truncated power-laws. In order to study the large time behavior of the opinion dynamics a mean field description is derived which allows to compute exact stationary solutions in some simplified situations. Numerical methods which are capable to describe correctly the large time behavior of the system are also introduced and discussed. Finally, several numerical examples showing the influence of the agents’ number of connections in the opinion dynamics are reported.

Uncertainty damping in the macroscopic forecast of vehicular traffic flow